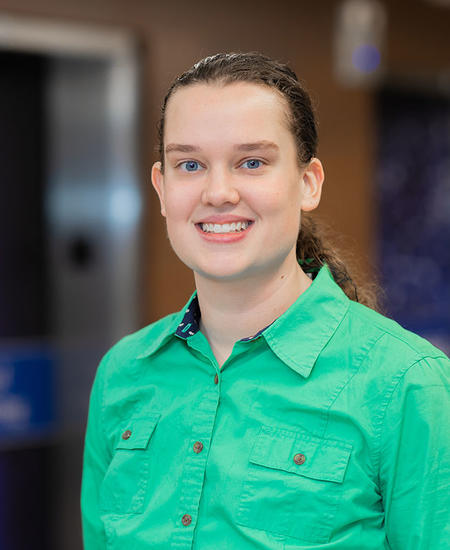 At Toyota, I had to give a daily presentation, and every few weeks, I also presented to the president of the plant. When they told me at GE that I had to give presentations, I wasn’t nervous at all. I knew I could handle it.

From working on a car manufacturing line to designing test systems for jet engines, Emily Novak has done it all. And she’s a fourth-year electrical engineering major at UK.

Why have so many doors opened for her in multiple industries?

“So many things need something electrical.”

Through connections she made at the College of Engineering’s annual career fair, Emily spent a semester and a summer interning with Toyota at its Georgetown, Kentucky plant. Working as a production engineer in their paint department gave her an introduction to fast-paced problem-solving. She worked alongside a mechanical engineer and chemical engineer as part of a team lead, though only a college sophomore at the time.

“Our line was the last place the cars went before they went out to consumers, so it was always high pressure,” Emily says. “The atmosphere was really exciting. I was nervous, but my hard work paid off.

Emily’s next co-op experience was entirely different. While her role at Toyota was people-focused, she assumed a highly technical role designing test systems for jet engines at GE Aviation.

“I’ve come full circle with the people and the technology,” she says. “These experiences have shown me that I enjoy both aspects. I hope to work somewhere in the middle.”

“At Toyota, I had to give a daily presentation, and every few weeks, I also presented to the president of the plant,” she says. “When they told me at GE that I had to give presentations, I wasn’t nervous at all. I knew I could handle it.”

How has bearing this responsibility affected Emily as a student?

“I came back with so much more confidence. I had to learn on the fly how to solve problems,” she says. “Because of these experiences, I now know that no matter how hard something seems in the beginning, I can figure it out.”

Emily also understands the real-world connections to her classwork. She describes herself as much more motivated to learn an operating system or process when she’s seen it in the workplace.

“Just sitting in class doesn’t give you a full understanding of what an engineer does,” she explains. “Getting to see what the work looks like every day, having mentors who teach you about being an engineer—that helps you see your future more clearly.”

But one of the features of her program that Emily sees as most valuable is the teamwork.

“Something that engineering, and especially electrical engineering, teaches more than anything else is teamwork,” she reflects. “Everyone is working together. And that’s so important because that’s real life.”

This summer, Emily will once again intern with GE. Upon graduating in May 2020, she hopes to obtain a leadership role that also involves technical expertise.

“Because of these experiences, I really know what I like and want,” she says. “The family I’ve found at UK has prepared me for what’s ahead. I know that I can tackle anything.”