The SME Frederick W. Taylor Research Medal honors significant published research leading to a better understanding of materials, facilities, principles, operations and their application to improve manufacturing processes. Each year since 1957, one researcher is selected for this award. 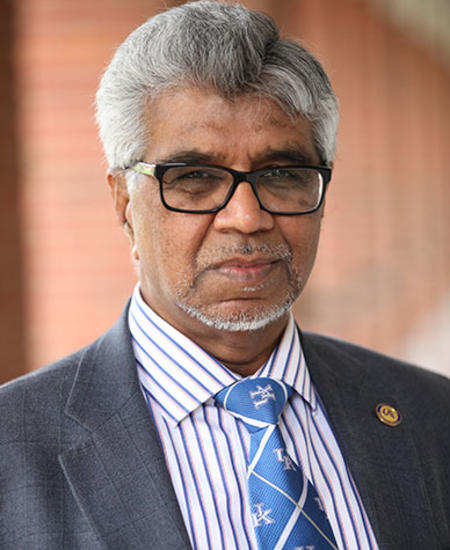 I. S. Jawahir, professor and James F. Hardymon Chair in Manufacturing Systems and Director of the Institute for Sustainable Manufacturing, has been awarded the 2022 Society of Manufacturing Engineers (SME) Frederick W Taylor Research Medal.

"I am very privileged, honored and humbled to be selected for this award this year," said Jawahir. "Past winners of this award include several leading researchers from Europe, Japan, and the U.S., including over a dozen NAE members."

Jawahir's current research includes predictive modeling and optimization of manufacturing processes. He has published extensively, including over 155 journal papers, been awarded four U.S. patents, delivered 72 keynote papers at international conferences and over 150 invited presentations in 38 countries. He is a fellow of CIRP, ASME and SME; editor-in-chief of the International Journal of Sustainable Manufacturing; and a technical editor of the Journal of Machining Science and Technology.

Jawahir has also been active in collaborative research through the International Institution for Production Engineering Research (CIRP). He has led five research groups, founded the CIRP Conference Series on Modeling of Machining Operations in 1998, co-founded the CIRP Conference Series on Surface Integrity in 2012, and is currently leading the IMPACT research group. He received the 2013 ASME Milton C. Shaw Manufacturing Research Medal and the 2015 William Johnson International Gold Medal.

The award was created in honor of Frederick Taylor, a great American inventor and visionary leader in manufacturing whose pioneering work led to the Ford Motor Company's manufacturing automation in the 1920s. He worked tirelessly in materials – inventing the high-speed steels, still used in drills and other applications today – machining, metalworking fluids and manufacturing methods.