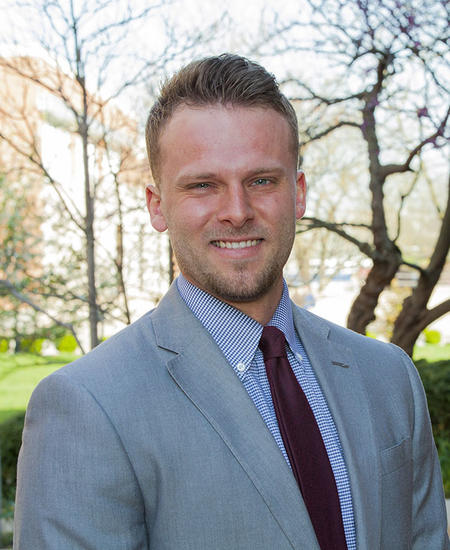 Figure out your "why" and let it be something that’s way bigger than yourself.

When asked about a normal day at his job, University of Kentucky College of Engineering alumnus Jonathan Kellogg has an immediate answer: “There isn’t one!”

Most days begin with an early morning arrival at the Capitol and a review of the day’s schedule. Jonathan must stay aware of every detail: Do we have a flight that we need to make today? Is the governor going to lunch, or do I need to have it ready for him? Does the governor have all the information needed to talk to the press and discuss events? From there, the day can take any number of turns, from local speaking events to trips around the state to a flight to Washington D.C.

“I remember sitting in the first scheduling meeting and seeing the White House on the calendar for that month. All I could think was, ‘This is happening really, really quickly,’” Jonathan remembers.

He’s had a variety of surreal experiences, from meeting Israeli diplomats to attending multiple meetings and speeches inside the White House. Once, when he accompanied the governor to a speaking event in D.C., he had the opportunity to shake Vice President Mike Pence’s hand.

“It’s been a wild ride. God has opened a lot of amazing doors,” says Jonathan.

You might wonder: how does all of this relate to Jonathan’s engineering background?

After completing the MBA program in May 2017, Jonathan worked for a Lexington transportation design firm where he’d interned as an undergraduate student. Working for the governor couldn’t have been less on his radar, until one night in late July, he got a phone call from a friend who was serving as the governor’s special assistant but would soon transition out of the job. He thought Jonathan would be an excellent replacement.

After praying about it and discussing it with his parents, Jonathan decided to interview. A week later, he was offered the job.

Though his daily work bears little outward resemblance to that of an engineer, Jonathan has found his engineer’s endurance to be invaluable. Jonathan played soccer in high school and remembers days of grueling training, hill sprints and two-a-day practices. Those days of “playing in the trenches” prepared his team to go deep into the playoffs—and he says engineering did the same thing for his mind.

From finishing calculus homework at 3am to taking late night exams to surviving chemistry, physics and calculus simultaneously, Jonathan built vast mental endurance. He recalls a vivid moment when, at 11pm after a lengthy chemistry exam he walked to his car in the rain with his 8am exam the next day already on his mind. “I thought to myself, ‘Am I really going to do this?’ Engineering works your mind in the same way.”

Jonathan faces continual challenges, from the chaotic schedule and long hours to the relatively low pay as a public servant. “There are sacrifices that you have to make, and had I not had all of that preparation and hard work on the front end from engineering, I would find it much more challenging to be here,” Jonathan explains.

From calculus to engineering design to luncheons in Washington D.C., Jonathan has a broad range of experience under his belt. Where will this take him in the future?

After fulfilling the one to two-year commitment of his current job, Jonathan may pursue political connections and become involved with transportation at the national level. However, he originally sought a civil engineering degree because he wanted to work in overseas missions. A four-month construction project in Uganda during his senior year only increased this desire, so he is considering the possibility of working abroad again. He also may reenter the professional engineering world.

For Jonathan, where he goes matters less than why he goes there.

“People get this idea that engineers are just super smart or love math. I’m not super smart, actually, and I don’t have this weird love for mathematics. What kept me going was that I wanted to serve people. That is the “why” for me,” Jonathan explains.

Whatever the future may bring, he’ll keep that motivation close to heart.

“Figure out your ‘why’ and let it be something that’s way bigger than yourself.”