If anyone understands overcoming challenges to earn an engineering degree, it's 2018 computer engineering graduate Austin Langton. 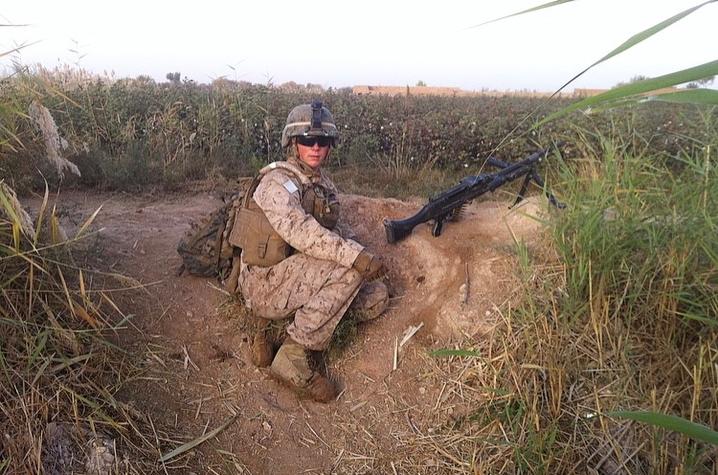 Austin Langton enlisted in the United States Marine Corps in 2010 and was honorably discharged in 2014. He graduated with a bachelor's degree in computer engineering in May.

More than 3,000 students participated in the University of Kentucky commencement ceremonies held last weekend. They were part of a sea of blue — all dressed in caps and gowns, but each individual graduate has a unique story. They each faced their own set of trials and tribulations to earn their coveted diploma, and if anyone understands overcoming insurmountable challenges it's Austin Langton.

"I have put in so much effort into graduating. I couldn't even envision it being possible."

You could say, it's not in Langton's nature to give up. Just three years ago, he set out on a mission to earn a bachelor's degree in computer engineering. Langton's time as a college student has been anything but traditional. With his sights on success, he has been determined to create a life for himself that he once thought to be impossible.

Langton's journey began in the summer of 2010. He was on the brink of adulthood. The 19-year-old made a courageous decision to put the lives of others before his own.

"There are so many reasons to join the military," Langton said. "I decided to enlist in the Marine Corps because I wanted to serve my country and I felt it was my duty and obligation to do so."

Langton eagerly signed on the dotted line of an eight-year contract to become a proud Marine. His commitment to the United States Marine Corps was a promise filled with uncertainty. He bravely served four years active duty and four years inactive reserve. Langton describes his stint in Afghanistan as grueling.

"Serving in the Marine Corps infantry was very challenging mentally, physically, emotionally and spiritually. It was not enjoyable," he continued. "However, I learned a lot about myself, most importantly that the limits we place on ourselves as humans only exist in our minds. I believe anything is possible."

Langton returned home in February 2012, and he was honorably discharged from the Marines in May 2014.

For countless service members, it can be a struggle to reacclimate back into the life they left behind, Langton was no exception. The transition would test his strong-willed mentality. Upon returning from the battlefield, Langton recalls feeling overcome with emotion. The 26-year-old is not ashamed to admit, to this day, he struggles with psychological trauma.

"The Marines taught me to be an excellent Marine and an effective member of a rifle squad, they never taught me how to be a civilian again. Some of the most difficult things to process are the events in Afghanistan, and the death of men I was very close with. I wear a bracelet every day to remember two of my closest friends, HM2 Brian K. Lundy and LCPL Travis M. Nelson."

Langton is still learning to cope with the aftermath of tragic loss, but he was able to take away some positive lessons from his time in the Marines. "They taught me there is always more to learn and more goals you can accomplish."

Determined to persevere, those goals brought Langton to UK in January 2015.

"The University of Kentucky has changed me in so many ways," he said. "I rediscovered my passion for mathematics and envisioned a different life for myself, my wife and future family."

Langton never wavered when it came to turning his vision into reality. He chose to apply his unique skill set to computer engineering. Beyond the research he's done in robotics, Langton has enjoyed the freedom to focus on bettering himself.

"UK has given me the inspiration to believe in myself, and through the immense challenges of studying engineering, I have learned to think critically on my own."

In his sophomore year, Langton applied and was accepted to the National Aeronautics and Space Administration (NASA) Pathways Intern Employment Program (IEP) at the Kennedy Space Center. The IEP provides students with opportunities to explore careers while still in school.

Langton spent his days in a rapid proto-typing laboratory called Swamp Works. The government and commercial space uses the technologies required for working and living on the surfaces of the Moon or other planets and bodies in our solar system.

"I primarily work with robotics. Our mission at Swamp Works is to utilize the resources on Mars and on the Moon to aid in human missions to the planet," Langton explained.

The Swamp Works team establishes innovative and cost-effective exploration mission solutions through leveraging of partnerships across NASA, industry and academia. Concepts start small and build up fast, with lean development processes and a hands-on approach.

Little did Langton know; the dream internship would turn into a dream job. An informal letter from NASA would prove that his tireless work ethic had paid off. Langton will be converted to a full-time employee upon graduation.

"Being offered the job at NASA was very surreal. To this day, I still feel overwhelmed knowing that I am working with some of the most brilliant minds in the world."

Langton credits UK with helping him become one of those brilliant minds. On May 6, with undeniable excitement, he walked across the stage at Rupp Arena. With an outstretched hand, Langton gladly accepted the diploma he rightfully earned.

Now, Langton aspires to inspire other veterans. He wants those who feel lost and alone, as he once did, to know hope and help is within reach.

"I would say, as a veteran you have accomplished so much in life already, and becoming a civilian presents you with a golden opportunity to start a new life and be whatever you want to be."

For more information you can visit the Veterans Resource Center, which was established to continue a tradition of support by providing UK's military and veteran populations with the service and assistance they deserve.

This article was published in the May 10 edition of UKNow. Click here for the original article.