The award recognizes one female faculty member and one female staff member who promote growth and well-being of women at the university and across Kentucky. 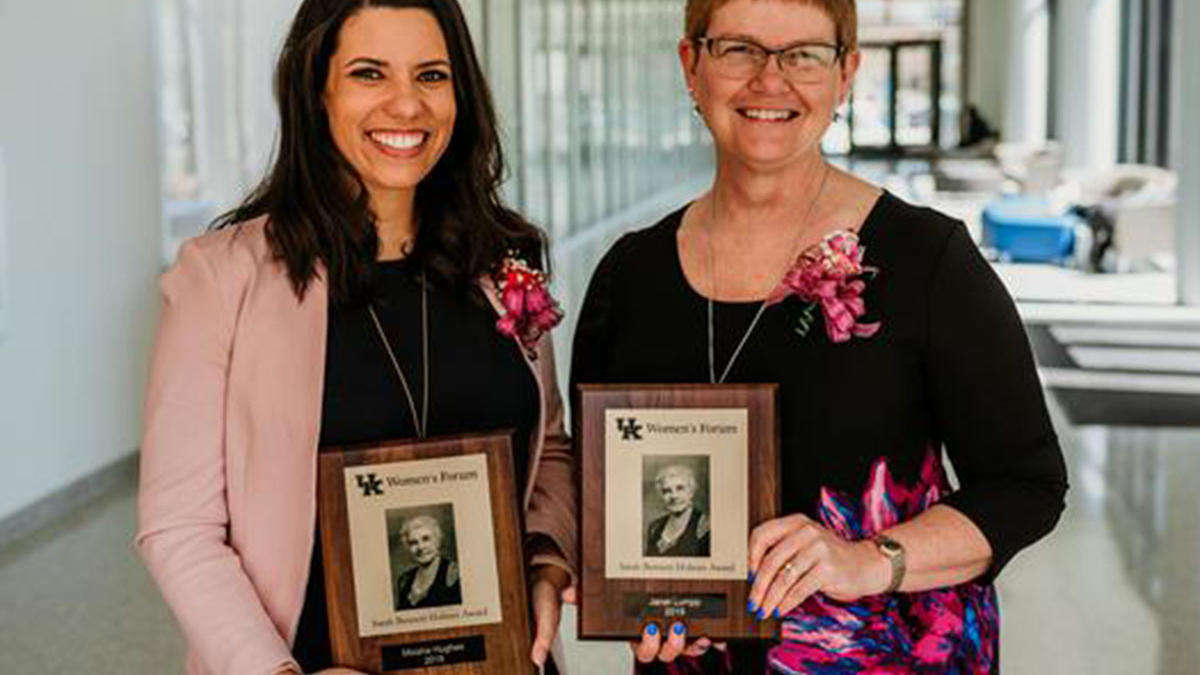 Two University of Kentucky women who profoundly contribute to issues that affect women at the university and across the Commonwealth received the 2019 Sarah Bennett Holmes Award Wednesday, March 27, during a luncheon ceremony at the Gatton Student Center Ballroom. Staff recipient was Micaha Hughes and the faculty recipient was Janet Lumpp, both from the College of Engineering.

The award recognizes one female faculty member and one female staff member who promote growth and well-being of women at the university and across Kentucky. Created by the UK Women’s Forum, the Sarah Bennett Holmes Award has been among the most esteemed recognitions bestowed at the University of Kentucky and brings recognition for efforts that might otherwise go unnoticed.

Micaha Dean Hughes is the director of outreach and community engagement at the UK College of Engineering, where she creates and leads K-12 outreach programs to get young students and their families engaged in engineering. Hughes also works to specifically recruit more women into UK Engineering and hosts special events to encourage greater female participation in the traditionally male-dominated field. She holds a bachelor's degree in integrated strategic communication from the University of Kentucky, and she is currently seeking her master's in STEM Education.

For 25 years, Janet Lumpp has been a faculty member in the Department of Electrical and Computer Engineering teaching and researching microelectronics, circuits and lasers. She was associate director of NASA Kentucky for five years before becoming the first director of the First-Year Engineering (FYE) Program in 2015. Lumpp has always been active in K-12 STEM outreach as well as cross-disciplinary research. She received her bachelor's and master's degrees from Purdue University and her doctorate from the University of Iowa.

Sarah Bennett Holmes, a distinguished former dean of women at UK, tirelessly championed the rights of women throughout her career. Widowed at a young age, Holmes raised four children while completing her own education. She then began a successful career at the university where she inspired young women to persevere in the face of hardship and pursue their career goals. Among her accomplishments, Holmes developed work programs for women during the Depression.

In her honor, the UK Women's Forum created the Sarah Bennett Holmes Award and since 1994 has been honoring women at UK who demonstrate the same principles as Holmes through their work and service.

The UK Women's Forum is an organization for all employees of the university faculty and staff. Its mission is to exert a leadership role in empowering, validating, informing, including and celebrating all women employed at UK by addressing challenges, communicating issues and recognizing successes within the context of the workplace.