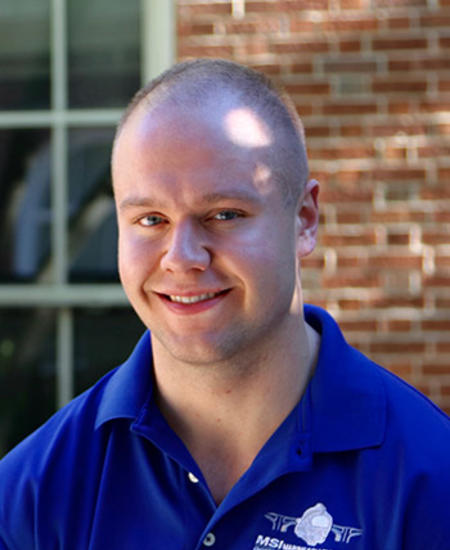 It’s engineering without the desk job.

Three days after receiving his diploma in December 2017, Alec Tenfelde did what every college graduate hopes to do—he began his dream job.

With a degree in civil engineering from the University of Kentucky, Alec now works as a project engineer for Marine Solutions, a specialized construction and engineering firm focused on building and maintaining waterfront, hydraulic, navigation and bridge structures. And Alec’s job? Donning a wet suit and plunging into the water to float beneath piers during inspections, so that he can assist in designing the most effective repairs.

“It’s engineering without the desk job,” he says, and for him, there was nothing better.

Alec isn’t kidding. He’s even been stung by jellyfish on the job. Although his work includes some office work, primarily writing government reports about his projects, the experiences of traveling and spending time outside makes it all worth it to him.

Alec first heard about Marine Solutions during his sophomore year as he picked his way through the crowds at an engineering career fair in Memorial Coliseum. Despite feeling daunted by the prospect of elevator-pitching himself, he immediately felt drawn to Marine Solutions.

Alec applied immediately after the career fair, but Marine Solutions turned him down due to his sophomore standing. Although he obtained a different internship, the exciting potential of Marine Solutions lingered in the back of his mind. During his senior year, he began the application process again. Relentless, he called the vice president of engineering’s office every day for a week until he spoke with him directly. After an interview, Alec finally obtained the position he had wanted for two years. His work in the field began with a job repairing docks at Buckhorn State Park in southeastern Kentucky. He also traveled to Maryland naval bases, such as Patuxent River and Annapolis.

Alec plans to attend dive school this year to pursue becoming an engineer-diver for the company, so that he can assist with the hands-on underwater construction. He also plans to take Kentucky’s Professional Engineer (PE) exam ahead of schedule.

“With a PE in hand, I can begin taking on other leadership responsibilities in order to advance further to the roles of team lead and eventually project manager,” Alec explains.

With his future goals in mind, Alec plans to keep plunging into any waters he needs to in order to keep doing what he loves.