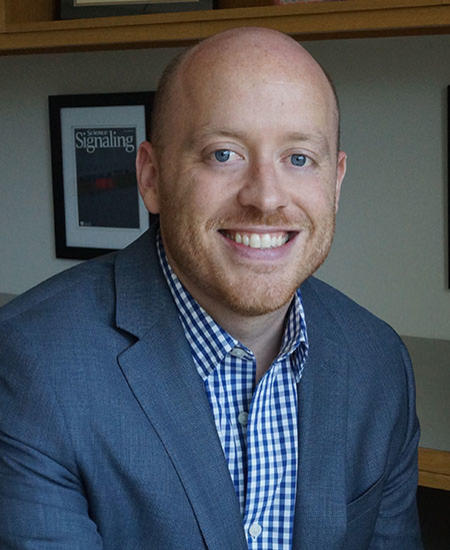 I was extremely fortunate to learn from dedicated and gifted teachers at UK.

The University of Kentucky is home to many great innovative engineers who have made enormous impacts upon our society. Kris Wood (BSCHE 2002), associate professor of pharmacology and cancer biology at Duke University, is one of those excellent engineers.

After graduating from Scott County High School in 1998, Wood found himself starting a new journey. It started at the University of Kentucky, where his interest in chemical engineering began. Since he enjoyed math, Wood decided he would take general chemistry during the first semester of his freshman year. He received the General Chemistry Award for the highest grade in the class of approximately 1,200 students.

“Chemical Engineering seemed like a good combination of chemistry and math, and based on this rationale, I chose it as my major,” says Wood.

In 2002, Wood graduated as a chemical engineer from UK and continued his educational journey by receiving his Ph.D. in the same field at the Massachusetts Institute of Technology (MIT) in 2007.

“I was extremely fortunate to learn from dedicated and gifted teachers at UK, including James Francis in Classics and professors Kim Anderson, Steve Rankin, Barbara Knutson, Winston Ho, and Tate Tsang in Chemical Engineering,” he says.

Wood recalls one professor having the biggest impact on his education and career: Dibakar “DB” Bhattacharyya. Wood worked in his lab as an undergraduate during his sophomore, junior and senior years. DB’s emphasis on creative and rigorous work drove Wood to pursue an incredibly rewarding career in research. He recalls entering MIT with a more advanced background in research than many of his peers. He believes it reflected the time and effort that DB invested in him.

Although Wood’s Ph.D. is in chemical engineering, he has always been most interested in cancer. After completing his Ph.D., Wood did something unusual: he accepted a postdoctoral fellowship in biology at the Whitehead Institute for Biomedical Research. He studied under the mentorship of David Sabatini where he learned how to ask and answer questions related to the fundamental biology of cancer cells. His research group at Duke has been able to integrate key aspects of his multidisciplinary background, asking fundamental questions in cancer biology, but using systematic and quantitative approaches-many borrowed from his engineering training- to answer those questions.

While most of Wood’s time is spent running his academic research lab, he also teaches graduate and medical courses at Duke, including one covering molecular and cellular principles of cancer biology, while frequently giving invited lectures at universities, scientific conferences, and corporations.

But his work does not stop there, Wood also spends a portion of his time translating his group’s scientific discoveries. This includes driving the creation of clinical trials to test drug therapies developed in his lab for cancer patients. It also involves starting companies that use the techniques and insights from their work to create new medicines and technologies that they hope will positively impact the world. Wood is co-founder of three such companies: Element Genomics, a genomics-driven drug discovery company based in Durham, NC that is now a wholly-owned subsidiary of UCB Pharma; Celldom, a single cell genomics company based in Silicon Valley; and Tavros Therapeutics, an oncology drug discovery company based in Durham, NC.

With over 40 publications and over 30 grants and awards, Wood hopes to have the biggest impact he can possibly make on his field and his trainees.

“I want our work to lead to a greater and more useful understanding of the principles that underlie cancer development, progression, and therapy. I also hope that our work leads to new drug therapies that improve the lives of cancer patients.”