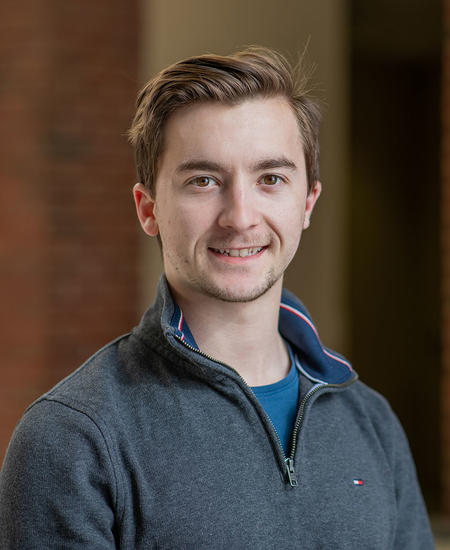 I want to be one of the people who redefines the Internet.

In January 2018, Brian Luciano pondered the upcoming summer. He wanted to gain computer science experience, but wasn’t sure if an internship best served his goal. Fortunately, Simone Silvestri, assistant professor of computer science at UK, sent an email to all CS upperclass students that invited them to consider an undergraduate research opportunity in his lab. Brian quickly went to Silvestri’s faculty page. Upon discovering the professor specialized in networks, Brian immediately replied he was highly interested.

“I always kind of knew I wanted to get into networking, so I thought this would be perfect,” says Brian. “I ended up speaking with his Ph.D. student, Vijay Shah, and I actually started working right away.”

Shah characterizes Brian as composed, intelligent, and a possessor of great attention to detail. “Brian has a unique blend of passion towards algorithms/coding, networking and a positive attitude. He is also a good team player.”

Brian’s research experience has gone so well that by the time he graduates in May, he will have spent a year and a half with Silvestri and Shah. Their primary research area is dynamic spectrum access networks, or DSA.

“Let’s say you have a phone that operates with Bluetooth, Wifi and 4G. Those are all separate antennas within your phone,” Brian explains. “DSA is a single antenna that can instantly reconfigure all of its settings and operate on any spectrum available without having to use separate antennas. In order words, it’s a dynamic antenna.”

DSA is mostly in development in part because of size. Brian says the DSA antenna in their lab is the size of a normal router—hardly the sort of hardware one could pop into a phone. As a developing technology, DSA is also quite expensive. Nonetheless, Brian’s hard work is paying off. Later this spring, Silvestri will present a paper the trio authored at 2019 IEEE INFOCOM in Paris, France. INFOCOM is one of the best, and most competitive, conferences on computer communications.

Brian’s deep knowledge of DSA networks has also paid off on the job front. When Cisco Systems posted a network consulting engineer position on UK’s jobs page, Brian decided to give it a shot. To his surprise, Cisco quickly arrange for an online interview.

“During the interview they asked me about my DSA experience, and I was able to tell them about my work in the research lab. About an hour after it ended, they invited me to fly to North Carolina for a final interview.”

Five days after visiting Cisco’s complex in Research Triangle Park in Raleigh, Brian received notification that the job is his. He can’t wait to get started.

“After I get done with training, I’ll have several accounts that I will manage. Whenever one of these accounts, whether a school or a business or an organization, needs to upgrade their network or implement a new network in their building, I'll be the person who designs or improves the network.

Brian says his research with Shah and Silvestri prepared him to move into his network consulting engineer role.

“Sometimes people think that if you do undergraduate research, the only thing you can do with it is go to graduate school. But it really has the same benefits as an internship with a company--maybe even better because undergraduate research doesn’t limit you to a summer or one semester. One thing classes can’t give you is the chance to work on long-term projects. I've been working on different DSA projects, but I’ve been adding to the same code the whole time.”

In the short-term, Brian is wrapping up his final semester of classes, as well as his work in Silvestri’s lab. Long-term, Brian hopes his future with Cisco will enable him to accomplish something really ambitious.

“I want to be one of the people who redefines the Internet.”