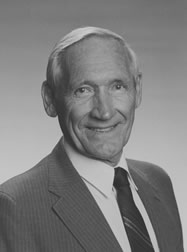 After graduation, he joined the Philco Corporation in Philadelphia as a field engineer. In this first position, he was assigned to the installation and evaluation of Early Warning Radar Sites throughout the northwest United States. In 1954, Mr. Barnes joined National Scientific Laboratories, Washington, D.C., as a project manager.

In what was to be the beginning of a distinguished career in the aerospace industry, Mr. Barnes joined Pan American World Airways, Patrick Air Force Base, Florida in 1955 as an electronics engineering specialist. By 1957, he was named manager of technical planning and in 1960 was named manager of range development.

In 1963, Mr. Barnes was awarded an Alfred P. Sloan Fellowship from the Massachusetts Institute of Technology (MIT). After receiving a Master of Science degree in Industrial Management from MIT in 1964, he returned to Pan American and was appointed manager of operations. As such, he managed all field forces for the company totaling over 4,000 employees. In March 1969, he was named general manager, Aerospace Services Division, and was responsible for all Pan American activities at the Cape and Test Range Tracking Stations.

Mr. Barnes was active in numerous professional organizations during his career. These include the Society for the Advancement of Management, American Ordnance Association, Missile, Space and Range Pioneers, National Contract Management Association and the American Society of Military Engineers.

He was a founding member of the South Brevard YMCA Board and founding director of the Fidelity Bank of Florida. He serves on the boards of the United Way of Brevard County, National Contract Management Association, Florida Technical Institute, Circle of Care Brevard County and Brevard Community College. He is a director of the First Union Bank of Brevard and First Bankers Corporation and served as general chairman for the Twenty-first Space Congress, Cocoa Beach, Florida.

Throughout his distinguished career, Mr. Barnes has received numerous honors and awards. These include the Apollo 11 Manned Lunar Landing Mission Certificate of Participation, Apollo Achievement Award, and the Public Service Achievement Award. In September 2001, Mr. Barnes received the National Space Club’s Lifetime Achievement Award for his long-term contributions to our nation’s space program. He is an Associate Fellow of the American Institute of Aeronautics and Astronautics and was listed in Who’s Who in Finance and Industry, 1983 and Who’s Who in the South and Southwest, 1976 – 1979.

Mr. Barnes and his wife, the former Margaret Harding, reside in Melbourne, Florida. They have two children, Lisa and Randall.