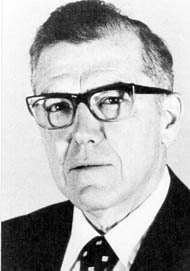 Born and educated in Fayette County, Kentucky, Samuel M. Cassidy received his Bachelor of Science in metallurgical engineering in 1925. After graduation, he accepted a position with Allen and Garcia Company, consulting and construction engineers, in Chicago, Illinois, where he received valuable experience in the field of coal mining. While employed at Allen and Garcia, he completed the requirements for a masters degree in mining engineering (’28). In 1946, he became president of Consolidation Coal Company (KY) in Jenkins, Kentucky. In addition to his contributions to the coal industry, the College and the University, Mr. Cassidy went to great lengths to improve general living conditions in the remote area surrounding Jenkins and to stimulate community interest in cultural affairs. He was a driving force in civic, social and political affairs. In addition to being actively involved in a number of professional organizations, Mr. Cassidy has spoken to various groups of UK students and, through Consolidation Coal Company (KY), has seen to it that deserving students have been provided scholarships.

Mr. Cassidy was inducted into the College of Engineering Hall of Distinction in April 1992. Unfortunately, he died later that year. He is survived by two sons, Charles S. and Samuel M., III.