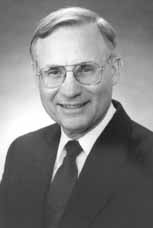 A native of the tobacco growing community of Pierce, Green County, Kentucky, Paul Yates Thompson was the youngest of seven children. He graduated from Greensburg High School then enrolled at the University of Kentucky where he received a Bachelor of Science in Civil Engineering in 1958. As an undergraduate student, he was active in the American Society of Civil Engineers, the Arnold Air Society, a Cadet Major in the Air Force ROTC, and was elected to Tau Beta Pi, national engineering honor society.

During his senior year and immediately after graduation, Dr. Thompson worked for the Kentucky Highway Department’s Branch Bridge Office located in the College of Engineering . At the same time, he pursued graduate studies in structural engineering.

Entering the United States Air Force in March 1959, Dr. Thompson served in the U.S. Air Force in civil engineering and command positions for the next 20 years. He served one year in Vietnam as Executive Officer of the 823rd Civil Engineering RED HORSE Squadron – the Air Force’s equivalent of a Navy Seebee unit. During his tour of duty, Dr. Thompson was awarded a Bronze Star and Outstanding Unit Award for Valor.

While on active duty, he attended Northwestern University as a Walter P. Murphy Fellow, earning a Masters in Environmental Engineering (1962) and the Massachusetts Institute of Technology earning a Ph.D. degree in Civil Engineering (1968). He also completed Squadron Officers School , Air Command and Staff College , and the Industrial College of the Armed Forces.

Retiring in 1979 as a Lieutenant Colonel, Dr. Thompson accepted the position of Vice President and Managing Director of Mirabid-Gray International, a young engineering-construction firm in Riyadh, Saudi Arabia. During Dr. Thompson’s three-year tenure, the firm grew from 500 employees with $50M in projects to more than 3,000 employees and $760M in projects.

In 1982, Dr. Thompson returned to government service as the Chief Scientist of the Air Force Engineering and Services Laboratory, Tyndall AFB, Florida , an organization he helped originate in 1972. During this time he was selected as a Senior Executive Fellow at Harvard University .

Dr. Thompson has more than 30 refereed papers in technical journals and more than 200 technical reports. He has served on numerous committees and boards including panel chair, National Science Foundation – Geotechnical Engineering, Chair of the American Institute of Steel Construction Partners-In-Education Committee, and holds memberships on the U.S. Air Force’s Scientific Advisory Board, the Department of Defense’s Technical Area Review Assessment Panel, Board of Directors of NASA’s Florida Space Research Consortium and the Academic Research Council for the Civil Engineering Research Foundation. He was named Florida Engineer of the Year in 2000 by the Florida section of the American Society of Civil Engineers. In 2006 he received the Civil Engineering Career Award from UK ’s Civil Engineering department

A registered professional engineer in Kentucky , Florida and Maryland , Dr. Thompson is a Fellow of the American Society of Civil Engineers and a member of Tau Beta Pi, Sigma Xi, Chi Epsilon honor societies and the American Society for Engineering Education. His biography appears in “Who’s Who,” American Men and Women of Science and Engineering, the Dictionary of International Biography, and the National Register of Prominent Americans.

Dr. Thompson was inducted into the College of Engineering Hall of Distinction in 2000. In his free time, Dr. Thompson enjoys golf, gardening, jigsaw puzzles and reading. He and his wife, the former Gayle Hood, reside in Gainesville, Florida. They have three children, Dr. Lynn A. Carter, Dr. Jeffrey Y. Thompson, and Dr. Michael Keith Thompson, and five grandchildren.